The time will come when you need to get serious about your longarm quilting. Maybe you recently purchased your machine and have pushed yourself as far as you can go on your own, or maybe it’s time to start taking in quilts as a business and you want some level of accreditation or credibility.

When that time comes, check out the APQS Longarm Certification course. Co-taught by Dawn Cavanaugh and Myrna Ficken, this 14-week course will turn you into the quilter you deserve to be.

Karen’s Story—Standing Out from the Competition through Certification

When Karen Kineman decided to go pro, she wanted a way to set herself apart from the competition, as well as starting her business, Graceful Touch Studio, on a positive note. Since few other longarmers in her area are certified, she felt that would give her a leg up. “I chose the Longarm Certification Class based on several things,” she says. “One was the price. I felt that the price was fair, and also the reputation was good.”

The feedback she received was excellent. “I feel as if I’ve grown as a quilter,” Karen says. “And I’m doing three times the business since receiving certification.”

Patricia Hale, a retired physician, had no interest in going into business. After all, she was retired. But she had just gotten her HandiQuilter Avanti, and wanted to push her skills.

“I was trying to develop my skills on my own, but it was slow going,” she said. “I’d take a class at a shop, and then maybe I’d try it out when I got home, but I wanted something with more structure, with more of a regimen.”

Knowing that she had to turn things in made her work harder, she said. She put in more effort up front, and it was that effort that helped her improve. “That practice was incredible. I bought cheap muslin and cheap batting, and didn’t quilt anything else in that time.”

The most valuable lessons for her, Patricia says, were the rudimentary shapes that built muscle memory, and the instruction on tension.

For the basic shapes, students have to create them over and over, going at them from different directions. “I could measure in miles the fabric I went through honing those shapes,” Patricia jokes. “It jumped my skill level and control level. I developed a motor control of the machine doing this that made feathering, and all the rest of the course do-able.”

As for the lessons on tension, Patricia says, “This course was outstanding. It really, really was.” The amount of detail provided on all the variables was more than she’d ever seen, she says, “And I’d scoured the Internet for information on tension.”

Though the course is sponsored by APQS, what she learned absolutely applied to any machine. “I have no problems with tension anymore,” she says. “If something comes up, I know exactly what to do about it, and how to monitor it.”

“I was pretty proud of what I turned in for the final assignment, which was whole cloth quilting,” she says. Patricia confesses that she’s a bit of a rebel, and strayed away from the typical medallion-style, whole cloth quilting. Instead, inspired by a trip she took with her son to see the 2017 eclipse, Patricia created a mythical bird in variegated thread, using her feathering skills to create the tail. She thread-painted the eclipsed sun in the background and then filled the rest of the sky in with dense quilting.

“You send your homework assignments in, and they’re not returned, because the cost of shipping isn’t worth it. The items are donated,” says Patricia. “But this one, I asked for it to be returned, and included a return shipping slip. When I got it back, I entered it into the Vermont Quilt Festival.”

Her “homework assignment” now hangs in her house, with a second place ribbon pinned to it. 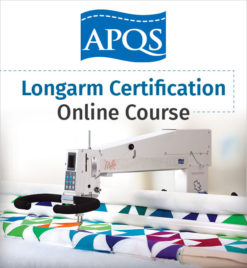