Visit our QUILTING TOGETHER landing page for daily ideas and inspiration as we stand together during the COVID-19 crisis. Dismiss

Pepper Cory’s path as a quilter has taken her around the world, but she almost let the hype surrounding curved seams—namely, that they’re hard—keep her from trying a classic pattern that’s since become one of her favorites.

In the early 1970s, during her final year of college at Michigan State University, Cory attended an auction near Lansing, Michigan. When an unfinished pink-white-and-black quilt top was held up, Cory recognized the Drunkard’s Path pattern she had recently become familiar with thanks to the classic book, 101 Patchwork Patterns by Ruby McKim. “I thought as I looked at all the curves, ‘I will never make that—I’ll have to buy it,’” she says. She bid on it and took it home for a song.

She soon joined a church quilting group made up mostly of older women who taught her to hand quilt and helped her quilt her purchased top about a year later. The process made her start to think that maybe she could piece one on her own someday, but prior disastrous experiences of setting sleeves into garments, combined with McKim’s warnings that the pattern was a challenging one, loomed large. “I was totally cowed about the Drunkard’s Path,” she says.

Within a few years, though, the Drunkard’s Path rose to meet Cory when she was teaching patchwork and “barely staying ahead of my students.” It turned out to be the first full-size quilt she would make. “It was in very bright colors: screaming yellow calico, and a much smaller-scale plaid in purple and pink,” she says. “I think there was some green in there, too.”

That quilt is now long gone, having worn out years ago, but it taught Cory a few things. First, she learned that she likes combining disparate colors and prints in the same quilt. And second, “Once you become confident at curves, no curves are off limits.”

By 1991, Cory had become confident enough at sewing curves to write a book, Happy Trails: Variations on the Classic Drunkard’s Path Pattern, which was later republished by Dover as 65 Drunkard’s Path Quilt Designs. In her introduction, she took care to reassure quilters in her characteristically warm and straightforward tone that, whether piecing by hand or machine, they could indeed succeed with some practice. “Your very first Drunkard’s Path sample may not be an unqualified success,” she wrote. “On reflection, you may find little things wrong with your work. Good. All that means is that you are not yet through with the Drunkard’s Path pattern.”

As if to prove her point, Cory has continued to experiment with Drunkard’s Path designs off and on —clearly, she is not yet through with the pattern herself.

Eclipse, which was included in her 1991 book, is the quilt she still gets the most email inquiries about from people wanting to know where they can get their hands on those fabrics. “But the fabric isn’t important,” Cory says of the prints and repurposed plaid shirts she pulled from her stash 30 years ago. “People buy the book and they go, ‘I want to make that!’ You already have the fabric in your stash, just sort your stash into lights, mediums, and darks. It’s a matter of being strict with yourself in sorting the colors.”

Eclipse displays the Drunkard’s Path in one of its original settings, the symmetrical Rob Peter to Pay Paul variation that Cory’s research shows first appeared in early 19th-century English quilts. This “tidy” pattern probably came to the U.S. with English immigrants, where quiltmakers soon started playing around with the orientation of the units to create new designs. “Americans are really good at this,” Cory says. “We take tidy stuff and we blow it up and reassemble it.”

Meteor Shower, made in 2014, exemplifies that can-do spirit. It’s a design she came up with when she wanted to take the Drunkard’s Path in a more contemporary direction and is one that she teaches in her classes. By increasing the basic units to 8″ x 8″, she realized she could combine them with any other block that could be drafted in 2″ increments, such as the star blocks embedded among the quarter-circle units that yield the striking design.

Cory notes that Drunkard’s Path quilts gained in popularity during the 1930s, owing in part to the fact that “a lot of them were done with scraps, and any pattern that was done with scraps was revived in the ’30s. They were kind of promoted as being worthwhile endeavors.” But she thinks it’s perhaps not entirely coincidental that this upsurge occurred on the heels of Prohibition, which lasted from 1920 to 1933. “Prohibition kept no one from drinking in the 1920s,” she says. “Drunkard’s Path coming back in the ’30s was probably a thumb-in-your-eye about it, people saying in a ‘wink wink, nudge nudge’ manner that Prohibition is over and we can have fun again.”

In the nearly five decades since she bought that first Drunkard’s Path quilt top, the pattern’s seemingly endless versatility keeps Cory interested in exploring more variations. And even at this point in her quilting career, she still appreciates the technical challenge of curved seams.

“It’s just one I return to because I know after doing it so many times that there’s a continuing appeal,” Cory says. “It teaches you some skills; learning to sew a curve is no mean feat. When you see that circle click neatly into place, then you get a little boost in your confidence. It can be made in myriad colors and prints and still look fresh.” 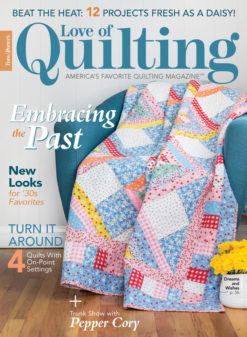 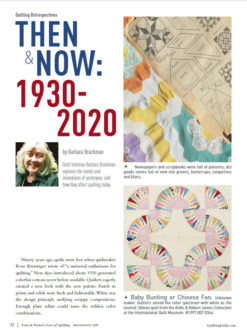 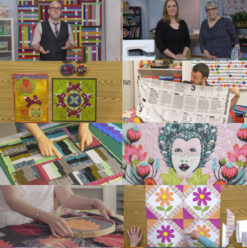