Welcome to the grand adventure that is Nature Printing! In this course, you will learn how to take humble natural materials like leaves, fruits, vegetables, seashells, and combine them with easy-to-find, water soluble and non-toxic supplies to create stunning fabrics. All of the techniques covered are explained in depth in the video lessons, detailing exactly what types of paints or inks will work best, what fabrics are preferred and why, the steps involved to attain successful prints, and variations to try after you’ve mastered the basics. There are even troubleshooting tips and tricks to help you print frustration-free for beautiful results.

Jane Davila is a fiber and mixed-media artist who began her professional art career as a printmaker, specializing in etchings and intaglios.  Learn more about Jane here.

Here is the transcript of the video lesson Jane did explain how to do sun printing with a salt effect:

Jane: Another really cool effect that you can get when you’re sun printing is to use some salt.  And the chemical reaction that happens with the salt is very similar to what happens when we’re hiding, or compressing, or using a mask on the fabric in that it makes some of the paint dry fast and some of it dries slow.

So salt absorbs water. That’s what it does really, really well. So wherever there is a piece of salt on your fabric, it will pull all the moisture near it toward it and it will pull pigment particles to it. So you can see from a lot of the fabrics that I have here, these are all printed with salt and this is the easiest and fastest way, and you actually don’t even need sun to do this. You just need the salt. You could do this in a dark room in February and you’d be fine.

So you’re putting some salt on your fabric and everywhere that there’s a grain of salt, the salt itself will draw the moisture, it will pull it toward it, and it will pull the pigment particles with it. So where the salt is, there’ll be a dot of extra special … a clump of pigment. And then there’ll be a line or an area where there’s no pigment at all because it’s pulled it away from it.

So they sort of look like starbursts or sparkles and they look really pretty. They’re really pretty cool. So the kinds of salts that you want to use, you can use regular table salt, you will get very low results on that. You’ll get little bit, you won’t really see those big chunks of color coming out. But my favorite is to use sea salt. Sea salt, kosher salt, all of those are going to work really well.

And as you can see, the pieces of salt themselves are really big. And in sea salt, they’re irregular. So you’ve got really big pieces and smaller pieces and it gives you that very organic effect in the end and you don’t need very much at all.

Now one warning I will give you is that when you’re ready to do the salt printing, make sure you’ve done all of your other sun printing that you wanted to do before the salt comes out because you can’t see it and it ends up on everything. So even on a piece of fabric that you didn’t mean to salt print, you will end up with two or three little pieces of salt just randomly here and there.

Now, some of the things that you can see on these fabrics here is sometimes there’s a very specific direction to the way that the salt happens and they look sort of like fireworks that way. They’re all kind of heading out in the same direction. And what most likely meant is that when this was happening there was probably a lean to the fabric, so it was on something where you’ve got part of it up higher than others, and so gravity was working toward or against this as it was creating the effect.

So that’s something you can use to your advantage. You could actually put it on a board and then tilt it up one way or another and have all the salt effects run in one direction or you could just decide you don’t care and have them kind of go all randomly in all sorts of different directions.

This is one that’s done with smaller salt. So this was done with a kosher salt and the greens themselves were smaller. So you get kind of a different effect. Some of them can be done with lots of salt, some can be done with a little bit of salt. It really is up to you and I would suggest a lot of experimentation to see the effect that you like.

So we’re going to do one now and we’re just going to take a piece of fabric and we’re going to start the same way we start with everything else with our foam board, with our piece of plastic, our fabric, and our diluted ink, our paint, and then just paint this.

And the thing that’s pretty cool about the salt is you don’t see any effect at all in the beginning and then all of a sudden it just starts happening and it is just really pretty cool to watch. So this one’s just going to get painted. And as I’m painting it, I’m thinking about maybe how much salt I want to put on, maybe a little bit, maybe a lot, maybe this fabric would be really good for leaves and I might want it to look like … maybe it’s got bug holes in it or something, so I want some of those lighter areas.

Okay, so we’ve got that painted and we’re going to take a little bit of salt, and it really doesn’t take very much, and we’re just going to sprinkle some on. And I keep mine in a little container like this in my studio so that I remember, because as you can see, I’m putting dirty fingers in here that maybe you’re covered with paint and other things that I don’t accidentally use this for cooking afterwards. That separation of tools and food is usually a good idea.

So that’s really all the salt that I need to put on there. Now if I wanted to, I could do some clumps of salt. So I could do some bigger areas where they’re going to be, that’s going to be much lighter in those areas as it’s pulling all that moisture. Well, it’ll be darker than surrounded by lighter areas and we’re just going to do some kind of unevenness on the surface of this fabric.

All right, so this is now ready and this does not need to go in the sun if you don’t want it to go on the sun. It would dry faster, you’d get a stronger salt effect in the sun, but it absolutely works without having to use the sunshine.

Now, the thing that we’re going to talk about next is troubleshooting, because it’s one thing to know how to do things, but it’s another thing to know what to do when things don’t go quite right, so I’m going to show you some really cool tricks.

Jane will go on to talk more about troubleshooting when sun printing with a salt effect. If you would like to learn more, register today for The Printing on Fabric with Natural Materials interactive workshop.  The workshop starts on March 6th and run through April 3rd.  Registration ends on March 20th. 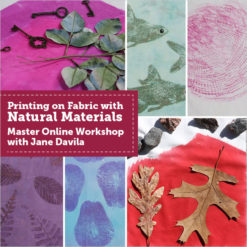