In Your Modern Heritage, we talk about quilts that we believe deserve a longer look. It’s a fairly broad direction, and that’s deliberate. Perhaps we’ll cover a quilt that was a game changer, affecting how we think about color or design, or maybe we’ll highlight a technique or approach that, for whatever reason, sparks a conversation amongst modern quilters. For Sherri Lynn Wood, who will be the keynote speaker at QuiltCon 2019, the conversation and collaboration is between her and her materials, in whatever condition she finds them.

“Grow the quilt from the affirmation” could well be Sherri Lynn Wood’s mantra. The author of The Improv Handbook for Modern Quilters: A Guide to Creating, Quilting, and Living Courageously (Abrams, 2015) wants to help people in the sewing community learn to focus less on the negative and on perfectionism, which squelches their true creativity and authenticity. She compares it to the improv comedy technique that asks performers to take anything anyone introduces into a scene and to build upon it rather than reject or try to change it.

“I relate to this because it’s true for me, too,” she says. “You end up focusing on something you think is imperfect that you don’t like, rather than focusing on what you do like. It’s the difference between ‘Yes, but’ versus ‘Yes, and.’”

Through her work of the past two decades, Sherri has developed her craft and her internal dialogue to get a place of being able to say “Yes, and” both to a wide variety of textiles, resulting in strikingly unique quilts, and to how she approaches her life as a whole.

“Often you end up loving the thing you didn’t like earlier on,” she continues. “Look at what you do like, and grow the quilt from there.”

As a first-generation quilter, Sherri saved her allowance money to buy her first sewing machine at age 12 and asked a neighbor to show her how to use it. After that point, she taught herself to sew garments—she describes her first dress as “a tube with pockets.” She continued sewing garments into her mid-20s, and started getting serious about quilting when she was about 28 years old. “Then I started selling really simple two-color checkerboard quilts at a local farmers’ market,” she remembers.

In 1990 she saw the exhibit Who’d a Thought It: Improvisation in African American Quiltmaking from the collection of Eli Leon, the first time she’d seen improvisational quilting. “After that, that was it—I just wanted to do improvisation and flexible-pattern work,” she says. “That was my route to being an artist.” In 1992 she took a workshop with renowned quilter Nancy Crow who showed her how to make quilts that would lie flat without needing rulers. Again, it changed everything for Sherri: “I never used a ruler again. I don’t know the last time I made a fixed-pattern work.”

Fixed pattern and flexible pattern are terms Sherri uses to describe piecing techniques in lieu of traditional and improvisational, which she says can mean different things to different people. Fixed-pattern work is measured, precise and goes according to a predetermined plan. Flexible- pattern work may also go according to a plan of sorts, but is more about being in tune with patterns presented by the materials themselves.

Through most of the 1990s Sherri’s work was heavily influenced by the art quilt movement, particularly the work of Susan Shie. She explored different surface design techniques, and her quilts were textural and heavily embellished. “Then I fell away from that,” she says. This shift in attitude coincided with 9/11 in 2001. “I got tired of all my stash about eight to 10 years after I started quilting. I sold it all off, and I began to work with clothing people brought me.”

A few weeks after 9/11 Sherri taught a quilted narrative workshop, out of which evolved her Passage Quilting series. More than creating a sole bereavement or memorial quilt out of a loved one’s clothing, she looks at passage quilting as marking, celebrating and honoring relationships. “It’s not just about making a memorial quilt, it’s about the whole bereavement process, about recombining the pieces in a new order,” she says. “I wanted to do stuff that was more meaningful, working with materials that had a story. In some ways that got me back to more traditional piecing, not in terms of being precise, but of not doing any more raw-edge work, of making quilts functional and pieced.”

Sherri has had to be intentional about her flexible-pattern work. Because it’s an internal and reflective process where the maker is deciding everything on her or his own, it can also lead to self-doubt. “If you’re making a piece and you make some sections that you think don’t go together, you may decide not to put them in the quilt,” she says. Not her, though—she wants to find a way to incorporate every part into the final product. This desire to make everything “hook up in meaningful work” has been a hindrance in the past. Early on, Sherri says that because she felt she had to use everything, she was reluctant to try new things for fear of making a mistake and wasting fabric. It’s a fear she’s worked to get over to be able to use everything willingly, and not because she feels she has to.

This is what she means when she says to grow the quilt from the affirmation, from an organic place, and not just from “cutting and mashing things around.”

In 2016, Sherri got the opportunity to put this approach to work like never before as the artist-in-residence at Recology San Francisco, located at the San Francisco Solid Waste Transfer and Recycling Center. During the four-month residency, Sherri had “scavenging privileges” at the center and access to a studio to create original work, culminating in a two-day public exhibit. It was a profound experience for her “to be immersed in patchwork as a model for living and to go back to the roots of ‘making do,’” she says.

“The whole thing that evolved came to the exploration of limits,” she continues. “We come from a culture of abundance. Limits can create more creative freedom, another kind of creativity.”

This was a true collaboration with the materials she found. “It wasn’t just me deciding what something’s going to look like, where it’s all my vision,” she says. Instead, she looked for what was already embedded in the materials beyond what she might have imagined, such as with 6×4. Not only was it made from six pairs of men’s pants, Sherri retained the pants’ shapes in the quilt. “The geometry expressed was beyond anything I could imagine myself.”

The quilt Afterlife was made from a set of curtains that had outlived their appeal as window décor, being shabby and faded by the sun in long stripes. Sherri originally was going to cut them lengthwise to make binding, but recognized the beauty that had been created by the combination of time and light.

Instead, she cut them across their width and repositioned the segments to allow the curtain material to be transfigured. As she sees it, “The fade marks made the quilt work.”

At its core, the idea of the entire Afterlife project was that of the transfigured object, of an object made new without losing touch with its essential character.

Sherri believes in the power of improvisational work, in listening and paying attention to internal patterns rather than following fixed patterns, as much in society in general as in quilting. “It creates a whole new way of looking at the world and seeing the world,” she says. “It can have impact; it can shift people’s perspectives.”

The ability to say “Yes, and” more often and “Yes, but” less in all aspects of her life gives Sherri joy, and is an approach she believes in passionately. “I think it’s great quilting has that potential to be that powerful and meaningful.” 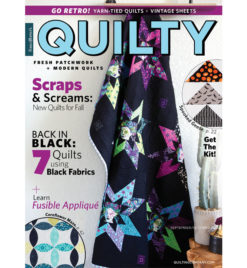 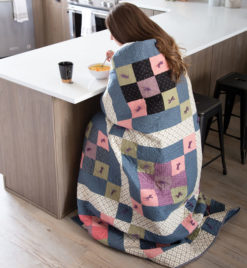 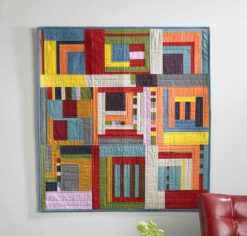