Face to Face with Imperfection

In Your Modern Heritage, we talk about quilts that we believe deserve a longer look. It’s a fairly broad direction, and that’s deliberate. Perhaps we’ll cover a quilt that was a game changer, affecting how we think about color or design, or maybe we’ll highlight a technique or approach that, for whatever reason, sparks a conversation amongst modern quilters. In this installment we’re profiling Melissa Averinos, a self-described “imperfectionist” whose improvisationally pieced and raw-edge appliquéd quilts have taken QuiltCon by storm not once but twice.

Melissa Averinos was teaching a class at 2016 QuiltCon in Pasadena, California, when she found out her quilt had won best of show. Someone came to her classroom directly from the awards ceremony, sidled up to her to interrupt, and then announced it to the class attendees, who erupted in cheers and applause. “I said ‘holy s***’ and started sobbing,” Melissa remembers. “It was awesome.”

The quilt was My Brother’s Jeans, a large, improvisationally pieced quilt that spotlighted worn and frayed pieces of denim roughly pieced into cross shapes and set against a creamy, low-volume background. The denim came from jeans Melissa rescued from a dumpster after the suicide of her brother, Michael, in 2009. The quilt’s striking design, combined with the story accompanying it, created a lot of buzz verging on controversy in the modern quilting world when it won the top award.
No one was more surprised by the win than Melissa, who says, “I don’t think of myself as someone who would win an award like that.”

A self-taught artist who lives on Cape Cod, Massachusetts, Melissa has been a painter since her early teens. She did some garment sewing in high school (“very badly” she says) and didn’t sew again until she made her first quilt in her early twenties. On the advice of a friend she bought a pattern for a Trip Around the World quilt and a lot of novelty fabrics to make it—”this was the ‘90s,” she notes.

“I opened the pattern and thought, ‘No way.’” She wanted a quilt made of the fabric she’d bought, but she didn’t want to do all that measuring and cutting. So she made her own interpretation of the pattern, figuring, “If I can sew it together and lay it on top of me and it keeps me warm, then I did a good job.”

A Return to Quilting

It wasn’t until she started designing fabric for FreeSpirit Fabric in 2008 that Melissa returned to quilting, working in her improvisational and intuitive style. “I was basically making scrap quilts, nothing too interesting or fancy, just enjoying fabric and color without too much thought,” she says. It was the growth of the Modern Quilt Guild and the first QuiltCon in 2013 that got her to consider other approaches. “I thought, I’m an artist—if I were to make something more than a scrap quilt, what would it be?”

One night in 2014 she was “messing around” with creating a raw-edge appliquéd face, using the design wall she’d made just a few days beforehand by tacking batting onto a wall, and posted a photo to Instagram.

When she woke the next morning, her phone was “blowing up” from reactions to her work in a way she hadn’t experienced before. She ended up Instagramming the process of making what became Giant Fabric Selfie so people could follow along.

“Once I finished it, I thought, That was cool,” she remembers. “And then I thought, Could I piece a face?” So again she turned to her design wall where she arranged and rearranged patches to design another face, Instagramming each step. She was more than pleased with the finished quilt, saying, “It was amazing. It was the first time I had tears in my eyes when I finished something.” The quilt was Face #1, which won a judge’s choice award at QuiltCon 2015.

“Because I come to quilting as an artist, I think I have a sense of freedom and not-rule-following that infuses my work,” Melissa says. “I didn’t start off wanting to be precise and follow a pattern. I look at it as another art medium.”

When her brother’s birthday came around in October of 2015, Melissa knew it was time to use his jeans in a quilt. She started cutting them apart, saving the frayed sections and setting the pristine pieces aside. “I wanted the worn and ruined parts, because those were the parts that were most interesting to me,” she says. As she played with the denim pieces on her design wall, the motif of a cross shape emerged immediately, not for any significance aside from its strong visual appeal. She paired the denim with a background of cream, white and low-volume scraps, including some novelty cat prints. “It really just made itself,” she says. “I just did it all day for a few days. That’s the joy of imperfection. The design happened naturally.”

She longarmed quilted it in a grid, to reference Michael’s profession as a tile installer, and tucked some pieces of gold ribbon behind ripped patches of denim as she went, writing on Instagram, “It just needed some gold.”

In contrast to its raw and improvisational start, Melissa was meticulous in completing My Brother’s Jeans. She finished the edges by facing them instead of using a traditional binding, and then squared it on the floor of her home; this was the first time she’d tried either technique. “I say it’s square-ish. For my first time squaring quilt, for an imperfectionist, I think I did a pretty good job,” she says. “And the facing, too—that’s probably the only thing that’s perfect on it.”

Emotion Is More Important Than Perfection

The discussions over the decision to award best of show to My Brother’s Jeans have come and gone, leaving the quilt to speak for itself to the larger community. “It’s a conversation-starter when people find out about my brother,” Melissa says. She’s been open about her own struggles with depression, too, and she says people “come out of the woodwork” to talk about suicide or depression in their families. “I love that it invites people to talk about things that they normally wouldn’t bring up. I think people are hungry to be authentic and connect.”

Since QuiltCon 2016, Melissa has been busy teaching her popular workshops on making raw-edge appliquéd faces (both human and feline!) and published Making Faces in Fabric (2018, Stash Books), a book on her techniques. She has also continued to design fabric, most recently for Hoffman Fabrics, has started designing and selling leggings on her website yummygoods.com, and has returned to garment sewing with a commitment to precision she didn’t have when she was younger.

Melissa considers My Brother’s Jeans the first of a series she still intends to make but that’s taken a backseat over the past couple of years in light of her busy schedule. “I love it so much,” she says of her award-winner. “I’m really proud of it. I think there was some pushback for it winning best of show even though it’s not technically perfect, but a lot of people told me how much they love it for that reason, that it doesn’t have to be perfect to be beautiful. Sometimes the emotion of something is more important than the perfection.”

This feature appears in the July/August 2018 issue of Quilty. Order or download your copy for this article and more.

Pick up your copy of Quilty and learn more for Melissa Averinos! 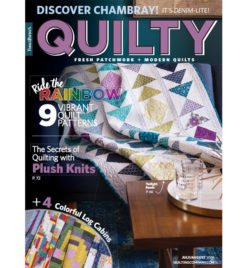 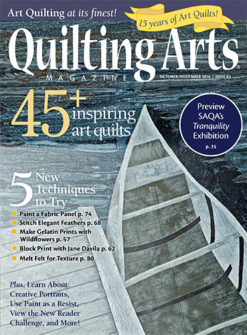 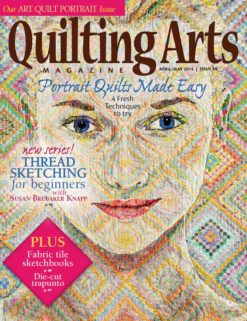